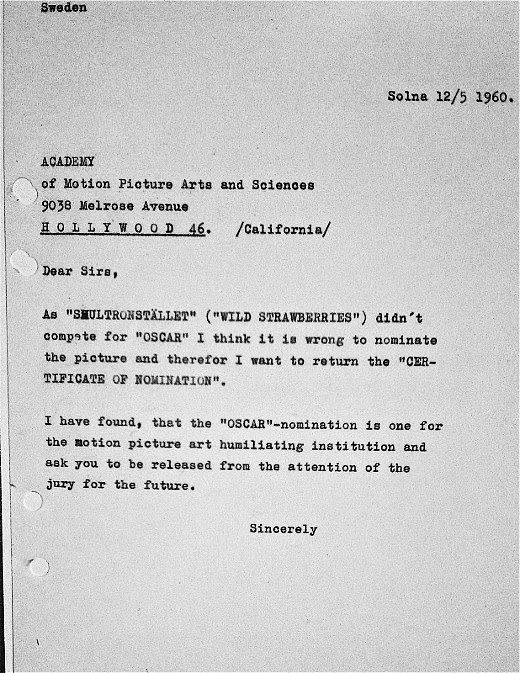 When I first began taking an active interest in cinema, I was 17 years old. My big exposures to the medium were the likes of Marvel films, Tarantino hits, and a handful of horror classics. I viewed the term “arthouse” as an ugly word (which it admittedly sometimes still is), and believed movies were there to entertain more so than to intrigue or provoke thought. While there is nothing inherently wrong with that desire, when you consume a massive quantity of something that never causes real reflection, it is all-the-easier to become jaded and bitter, pondering why you began exploring the art form in the first place.

Naturally, as with (I’d imagine) most novices to film, I saw the Academy Awards as the “golden standard” as to what film and filmmakers can achieve. Around the time I became invested, Tarantino won a Best Screenplay Oscar for his Django Unchained work, where he even said “This is the writer’s year, man!”

It’s been about eight years since then, and my thoughts on the Academy and the awards they give out have drastically changed. Just yesterday, I did a shift that lasted over twelve hours at my job; it was a Monday, therefore it was slow and I only interacted with three or four of my coworkers. Out of boredom and curiosity, I asked if they watched the ceremony the night before. None of them did; I don’t blame them, I didn’t either. Simply had better things to do. Also, not only was 2020 a difficult year for film, even my coworkers who were more interested in films than others seemed to respond with an unsubtle notion of “Honestly, who cares?” Again, I don’t blame them.

In this article I will try to articulate my current thoughts of the “culture” of this cinematic awards show and try to weigh the pros and cons. As I type this, however, I’m relatively certain the cons will vastly outweigh the pros.

Beginning with a positive notion: credit where credit is due. In explaining this, I will try to remain as objective and unbiased as possible. Some films, filmmakers, and actors damn-well earn their little gold statues. Not just in perceiving the hours and sweat that come with making a film, but for genuine contributions to the medium. Considering Best Picture winners, Birdman was one of the most innovative films one could imagine, composed of painstakingly long takes and written with dry, clever wit. Its commentary on the modern perspective and audience expectations of film and celebrity culture are timeless, skewering both the pretentious and the pedestrian. In retrospect, its win for Best Picture could be seen as a sign of clueless irony or indulgent self-awareness for the Academy. They’re either “in” on the joke or just oblivious to it.

Two other wins for Best Picture I truly appreciated were the two recent ones in Nomadland and Parasite. Nomadland was my personal pick for the best film of the year, so no matter how I felt about the awards show, it was validating to see it win Best Picture, even though I fully expected Mank, another film I enjoyed, to take it home. I had expected Fincher’s film to be victorious solely because (to my understanding) the Academy thoroughly enjoys films about their own culture (i.e. The Artist), which gives Birdman’s win (admittedly) a bit less credibility.

Nomadland surprised me both in its content and in its Best Picture win due to a distinct vision that does not seem traditionally Hollywood. It follows Frances McDormand’s character around various parts of the country as she travels in a van. Much of the endless cinematic potential of this premise was explored in a relatively plotless tonal experience. What it lacks in complexity it makes up for in raw emotion and feelings of an unspoken and subdued comfort.

And while Parasite was not, in my opinion, the strongest film running for Best Picture, its victory represented to me a large step forward for the Academy, as in recent years I’ve come to understand the Best Foreign Film category to be pointless and declining in relevance. To elaborate, in the age of the internet and a continuous growth in accessibility to world cinema, it would simply make more and more sense to dissolve the category altogether, opting instead to include worldwide films of any or all languages to compete for Best Picture. Whilst that did not happen immediately, I saw the South Korean film winning not only Best Picture but Best Director and Screenplay as a step in the right direction.

One can surmise in this essay thus far that I see the Academy as an entity that, while it means well, is a representation of the “star/celebrity” culture, in that it is out-of-touch and ought to grow if it expects to maintain any semblance of relevance. The other night’s awards show garnered a record-low ten million viewers, whereas I personally cannot name a single person who watched.

In my personal take, from both my own perspective and that of people I know, the reason for this disinterest has very little to do with movies, but instead with the basic narcissism of the whole ordeal, one that has been increasing heavily in public critique for the past decade.

Think about it: A-listers emerge from their Hollywood-hills mansions and coalesce in million-dollar suits and celebrate their own work by handing out statues of actual bronze and gold. When your job celebrates everyone’s hard work, that’s not criticized, but, odds are, you’re not spending several million on an awards ceremony and broadcasting it on cable.

And it’s not hard to theorize the substantial rise in distaste in the ceremony. We’re in the twilight of the star-worship culture, aimless loyalty to actors is in decline. We’re finally understanding the age-old saying of “no man is above the law,” but also adhere to the new rule of “self-indulgence is pretentious,” thoroughly realizing that there are better ways to spend a Sunday night than watching movie stars pat each other on the back. As abruptly annoying as cancel-culture has become, I believe we have that movement to thank for this epiphany, with its (originally) inherent values of disrupting the lives of those, many of whom are celebrities, who assault, bully, and leave trails of hurt and despair in their wake. Money and power can do disturbing things to people’s behaviors, and I for one am glad we’re finally calling them out on it.

And that’s hardly mentioning the endless stream of self-righteousness pouring from the mouths of nearly every individual there. These are oftentimes from individuals whose work I greatly admire, but their joy in being alone on a big stage whilst appearing profound is something I find more inspiring to wince at each passing year. Again, this is by no means a comment on the quality of performances like Joaquin Phoenix’s performance as the fearsome clown in Joker. But that doesn’t mean when he gets the gold-statue-of-validation from the academy that anybody wants to hear five minutes about the influence of his veganism.

There’s more than plenty of pseudointellectual narratives being passed around by Hollywood A-listers, but one of the biggest is a culmination of our parasitic former commander-in-chief’s election and his blatant bigotry. Hollywood, as we all know, is known (at least in recent years) for their liberal agenda. That’s fine, people can do or think as they wish in regard to political beliefs, but when you’re getting a Golden Globe (not exactly an Oscar, but honestly, who cares?) for Best Actress in August Osage County, it’d be pretty obnoxious to go on a political speech about the President rather than talking about the work that you do; you know, the things you know about? Actors are not political commentators; they’re talented, sure, but I always found it to be particularly out-of-place to take a nearly-propagandist stance and tell your followers who to support or vote for. And the person writing this hated Donald Trump.

This piece is not meant to skewer those who enjoy watching the Oscars and root for their favorite films to win awards. It’s only goal was to take a step back and observe the sheer absurdity of the situation, and ask its readers to take a reality check into the actual importance. While art is important, and awards could be enjoyable, I don’t think the two should often mix.

And I’m going to end this article with a broken-English letter by Ingmar Bergman (my favorite director), written to the Academy after having had been nominated for Best Foreign Film, just to drive home the point of the Awards’ unimportance to some of cinema’s most influential figures:

Articles on Cinema & Art. View all posts by JCE